A Good Day for a 50K: Hawthorn Half Day Race Report

About a week and a half ago, I ran the Hawthorn Half Day timed ultra in Hawthorn Park in Terre Haute, Indiana. 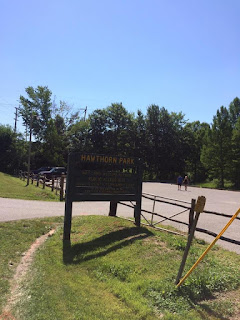 There were six-hour and twelve-hour options.  The course was a 3.1 mile loop that was a combination of trail/dirt, grass, gravel, and pavement.  I signed up for the twelve-hour option with no intention of running all 12 hours. My goal was to complete 50K and then begin the four-hour drive home without being too exhausted.  However, the week of the race predicted temps in the mid-90's, with a heat index at or over 100.  At that point I adjusted my goal to "whatever happens" and "just don't die."  It was refreshing to not have any expectations. Or just low ones.  I'm a sucker for low expectations! It takes the pressure off.  I'm not one to perform particularly well under pressure.  It's not like I'm trying to win the race or anything.  :-)  It's me against me.

My friends Vanessa and Helene were my travel buddies.  We drove up the night before, stopping at a Ponderosa (those still exist??) somewhere in Northern Kentucky for some buffet magic- so many carb and protein choices!  It was actually good!  Our friend Lucas joined us the morning of the race to act as our one-man crew and encourager.

Pre-race fresh faces:   (This is Vanessa.  I didn't get one with Helene and Lucas, unfortunately.) 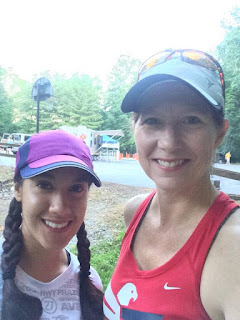 I went into this race fairly well trained but with a majority of my miles on the road.  The Flying Pig was going to be my longest run prior to this 50K, but that didn't work out due to illness.  I wound up with a 15-miler, a 16-miler, two 18's, and a 20-miler before this race.  My longest time on the trail was about 2 hours and 30 minutes. I knew this wasn't going to be technical, so I wasn't too worried.

Apparently, I thrive in looped, timed races.  I have no problem running the same 3.1 mile course over and over.  (Or the same half-mile loop over and over like at RUTS!)   I get to know the course intimately.  I have favorite spots and less favorite spots.  I know I will pass my own personal aid station multiple times.  I don't have to think.  I just run.  I also enjoy ultras because I can run slow and relaxed, and I don't mind being out there all day.

I ran the first few loops with or near Vanessa and Helene, but we wound up separating by loop four.  I figured I would find someone to talk to during the race, which happens so many times, but that didn't happen.  It was just me out there.  And it was GOOD.  I was in the best mood the entire race. My body was cooperating, and I was staying entertained by my own mind. 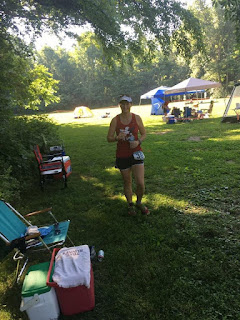 I think I was smiling like this the whole race.  I'm not sure which loop this was, but don't I look ridiculously happy?  It felt good to have a race go well for a change!!  There was no wall.  There was just happy running.  The miles and laps absolutely flew by.  During one loop, I took a few course pics, but mostly I left my phone at the campsite.  Here are a few scenic spots of the trail section of the course: 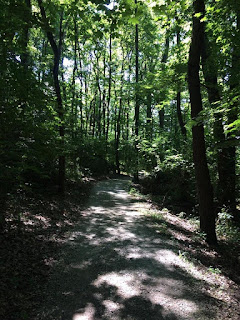 This was the most significant hill.  It was short, but steep.  There were four hills per loop, so I ran up 40 hills!  Only this one was noticeable, and one time, I found myself on the other side of it without noticing it.  I think that was loop 5 or 6.  I thought, "Wait, have I done the hill yet?"  I had absolutely no recollection of it.  I was lost in my thoughts..... 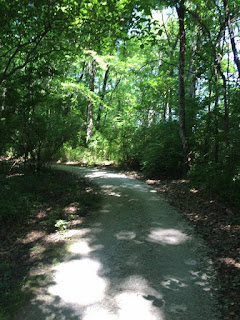 These next few show the lake we ran around. 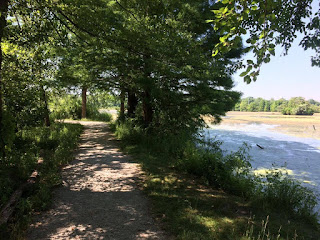 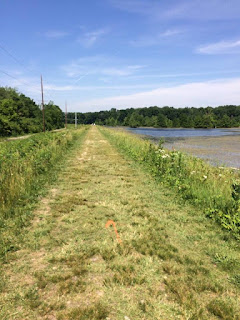 This is another full-sun section, but it is shorter.  Around my 8th loop, I was talking to another runner telling him my nickname for the above section as we ran this one.  He said if the long one is "the oven," this one should be called "the toaster oven."  Clever.  (CAUTION? These must be special attack geese or something.) 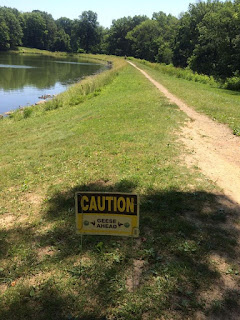 The early morning temps weren't too bad, but by late morning, it was WARM.  I concentrated on staying hydrated and staying cool.  Lucas crewed me like a boss.  He'd ask, "What do you need?" every loop, and I'd give him a list.  At the top of my list was a ziploc baggie of ice, then a water bottle filled 3/4 with ice and 1/4 with lemon-lime Skratch.   The Tailwind I had didn't agree with me that day, so I'm putting it away awhile for the less-sweet Skratch.

Honestly, the baggie of ice SAVED me!  I put it under hat to cool my brain.  I tied it on the back of my neck with a bandana.  My favorite spot for it was in my bra!   The ice would last most of a 3.1 mile lap.  I'd switch it every few miles, and it provided welcome distraction.

It is hard to know how to dress for a 90-degree + race.  I started the race in a tank, but it began to chafe, and I wound up switching to a short-sleeved white shirt as the day wore on.  It was very lightweight, and the motto fit!  (It was from my last trail race in Indiana last fall.) 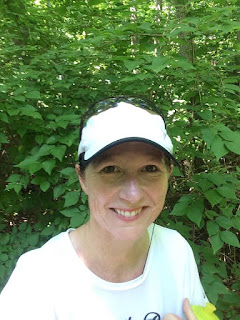 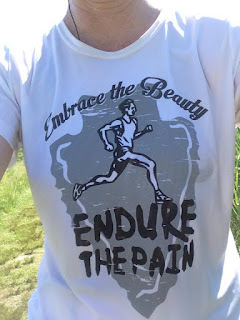 When the temperature got even warmer, we were blessed by a breeze, which made it not only bearable, but even comfortable!  Somehow this weather did not bother me at all the entire day.  Before the race, I was not concerned about my legs being able to do it, I was concerned about heat illness!  I had even considered not going to the race.  I wasn't sure how my body would handle these temps with my hypothyroidism and having gotten sick at the Flying Pig, at least partly due to the heat.  But I had friends praying for me during this race and sending me well-wishes, and I felt amazing.  I took it slow and steady, which is my favorite way to run anyway!

This is the temperature from when I hit the trail marathon distance.  I was still feeling good.  Nothing hurt. 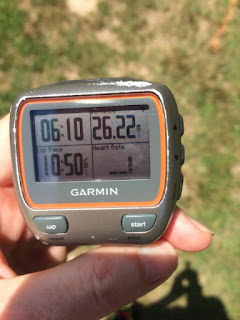 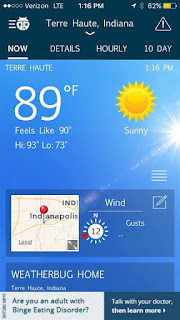 After the marathon, I just had 1.5 more loops to do.  I was running when I could and hiking when I needed to.  I crossed the 50K point in 7:23:05 feeling happy and truly blessed. 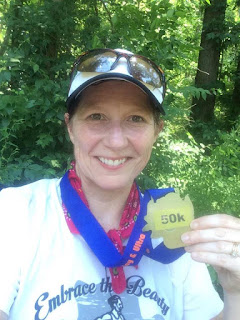 I felt recovered by Wednesday that week, except for one ugly toenail blister.  It finally went away 7 days later, but the toenail is now a nice shade of black.  I've taken a week and a half off from running.  The family and I went down to Florida for a great week of vacation the Thursday after the race.  I may not have run, but the Apple watch says we've walked 6-10 miles per day every day of vacation.  I love walking miles and miles along the beach.  I ran briefly for about 100 meters once just to say "I ran on the beach."  I just don't feel like running again yet or training for anything.  It's time for my yearly break to recover mentally and physically.  I'm ready. 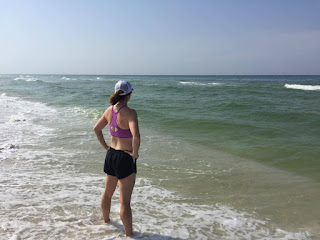 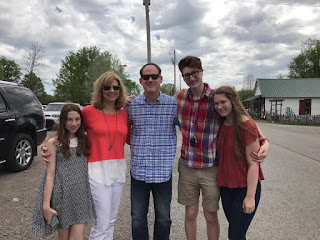